The Uberman Sleep Schedule (coined by Puredoxyk, the first Uberman sleeper) is a sleep schedule consisting entirely of 20-minute naps, spaced equidistantly throughout the day. In its traditional form, Uberman is 6 equidistant naps throughout each day.

There is nothing known about the long term health effects of being an Uberman, although there have been people who sustained the schedule for as long as a year with no serious health issues.

No one has EVER adapted to Uberman without the help of others, often in the form of a human alarm system.

The adaptation process for Uberman begins with 24-36h awake (or until one enters into a ‘second wind’, a rise in energy) at which point you begin taking a nap for every BRAC (1.5-2h). You might continue with this exaptation for 2-4 days until you are getting regular REM naps, or until you are no longer REM sleep-deprived and unable to nap so frequently.

You may forgo the exaptation and simply go straight into the adaptation phase, as always. Nap every 3h or every 4h on the dot – depending on which rhythm you feel comfortable with.

An expectation of Uberman is to go through a most infamous ‘zombie mode’ where normal cognitive function is severely impaired (due to sleep deprivation). Starting with an exaptation may help alleviate these symptoms, and of course, an 8 nap schedule will be less harsh than a 6 nap schedule to adjust to.

After this, one continues napping as your sleep cycles repartition (either on day 3, day 7, or day 10 – depends on the individual and their initiating sleep deprivation). It takes 3 to 4 weeks to adapt to the Uberman schedule. Some people may adapt faster, but many have taken a whole month to start feeling adapted.

Whilst many people will claim that the adaptation period is finished after a month’s practice, the body will continue to ‘adjust’ to this schedule for many months as continual entrainment improves habituation. Note that usually, people have habituated monophasic sleep for many, many years, and so whilst a month old Uberman should feel fairly rested and alert for about 22h a day, old mono-sleep habits still exist and it may take a long while for those to completely subside.

As habituation becomes stronger, and Uberman should gain some flexibility and be able to shift naps by an increasing amount of time without suffering from a rhythm disturbance. It becomes easier to recover from mistakes or events where naps cannot be taken when they normally would, and even occasionally a longer sleep period will usually not ruin an adapted Uberman’s schedule completely as it would have during adaptation.

Uberman Schedule is the most popular and famous of polyphasic sleep schedules because of it’s 2h sleep total. It should be noted that only about 5 percent of the population can get by just fine on six hours of sleep, so perhaps only 5% of people can do this schedule comfortably. A much higher percentage of the population may find an 8 nap schedule more sustainable, as the extra ~40 minutes sleep can make the difference between SWS deprivation and health.

Because the body gets different types of sleep at different times of the day, non-equidistant timing may be possible, and maybe even beneficial to the sustainability of the schedule. Such a schedule might be achieved by starting with an equidistant 8 nap schedule and, once adapted to it, then cutting out a late afternoon nap. After adjusting to the 7 nap schedule, once adapted to it, then cut out a late morning nap. All three (8, 7 and 6 nap schedules) should be easily transitioned between because they have the same ultradian rhythm, and they have the same nap times. This model would allow for ‘sleep-ins’ (8 naps a day) and ‘workdays’ (6 naps a day). 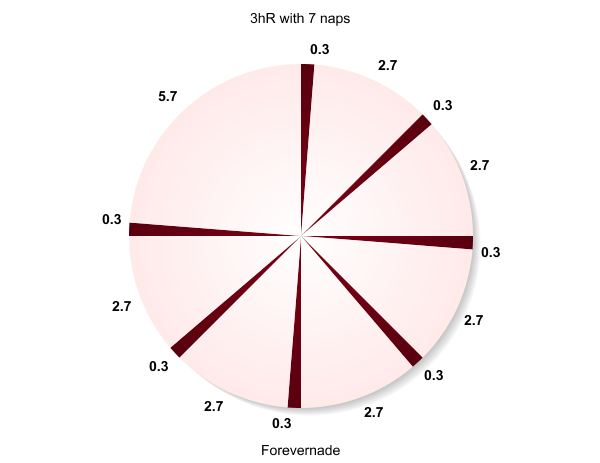 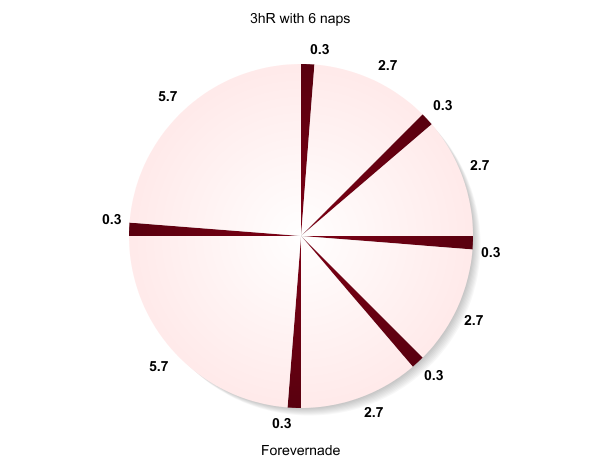 It could potentially be beneficial to take 40-minute naps at night. SWS generally takes longer than REM to transition into because there is a difference in brain wave frequency. The body takes a while to slow down and so this is why traditional Ubermen encounter the SWS crash so quickly, they simply don’t get enough SWS in a 20-minute nap because the first 15-20 minutes is light sleep. Of course, you can repartition SWS, there is no problem in that, but taking 40-minute naps at night may avoid the need to repartition SWS so harshly, and maybe even increase the overall amount of potential SWS available in the schedule (due to increasing the total sleep from 2h to 3h). 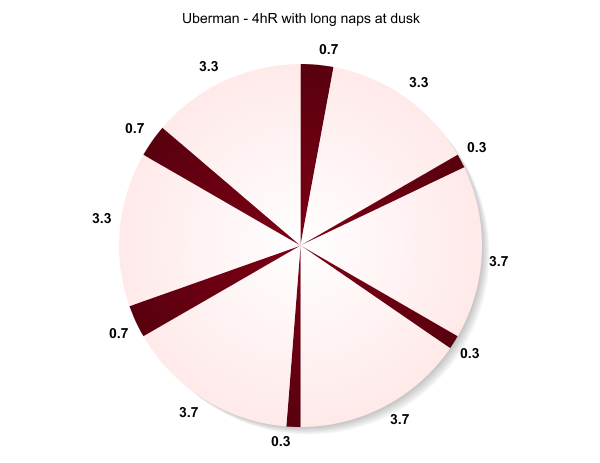 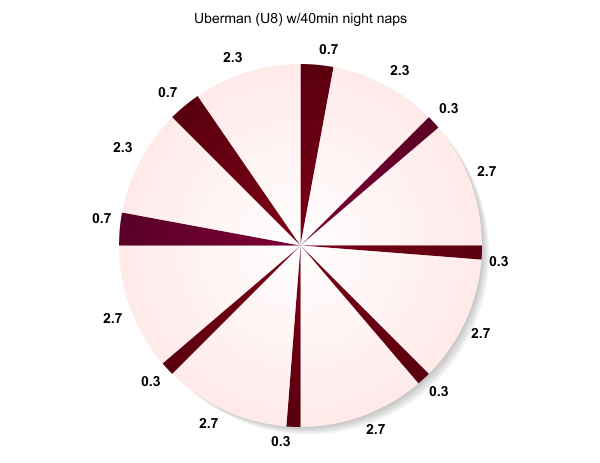 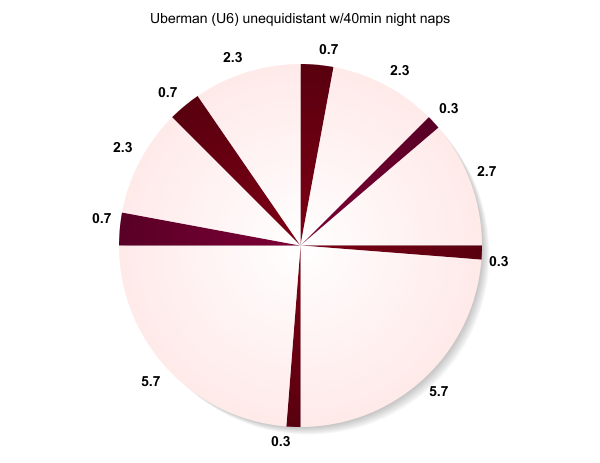 In some scenarios, a person adapting to the schedule will have an oversleep or ‘crash’ impending, and the best way to deal with a crash is to purposely ‘oversleep’ before the crash comes.

In other scenarios, a person has adapted and repartitioned their sleep, but they are still sleep-deprived of the initial sleep deprivation stage. This is usually because they are getting enough REM and SWS to sustain their schedule, but no excess sleep and therefore not enough to recover. If they are to refeed sleep and catch up from the initial deprivation required to create enough sleep pressure to adapt, then they will regain homeostasis.

There are two notable ways to recover from sleep deprivation on a nap-only schedule, neither may be ideal, but they get the job done. They should be implemented no more than every few days, and usually started around dusk, ten hours before the crash. (assuming the crash is expected around 4 am.)

The first technique, a Core Refeed, is to have a 1.5h core sleep in place of a nap. It is that simple, have a core sleep between dusk and midnight, then continue to nap as per your usual schedule, napping at your next allocated nap.

The second technique, a Nap Refeed, is to start to double your napping frequency, for example, if a [4/8/12] schedule Uberman may want to take extra naps at 6 pm and 10 pm.

These techniques basically increase the amount of SWS an Uberman can get (thus the sleep is around dusk) without disrupting adaptation too much. The more often you do this, the longer it will take to adjust to the Uberman schedule, of course, it should be said doing a refeed is better than crashing as you are intelligibly managing your stress levels rather than succumbing to them.

Predicting oversleeps on a nap-only schedule:

Sleep pressure is caused by glial fatigue, which is greatly increased by CNS activity, and learning processes.

SWS pressure increases with a drop in membrane potential bistability. Calcium signaling is how glial cells integrate and propagate signals in the central nervous system. SWS pressure is regulated by sleep spindle occurrences and periodic lowering of high-frequency brain activity, and in simple terms, the slowing of brain activity is a result of nervous exhaustion (reduction in calcium uptake following chronic depolarization). The brain can perform the actions of SWS at a much lower rate than it normally does when it is awake, so SWS pressure builds more slowly than REM pressure.

Adenosine breakdown is fast during REM (and can clear in 15 minutes) so this system explains why high-frequency REM sleep can be so much more refreshing than large blocks of REM as experienced by a monophasic sleeper.

In the first few days of adaptation, both REM and SWS pressure will rise, but the REM: SWS pressure ratio will be high when REM builds faster. As days pass and REM sleep rebounds in naps, the ratio will equalize and there may be a lulling point. Very often, however, a person’s REM rebound will be so powerful that the ratio drops low and soon afterward there is an SWS rebound.

This means that you can often predict an SWS ‘oversleep’ by realizing an oversleep is anticipated by a really really refreshing REM nap. You might wake up from a random nap feeling like you had a big cup of coffee … beware, as there is evidence that the next two naps the body will try to get SWS at all costs!

A note on nap-only rhythms

Not everyone’s rhythms are perfect, even when entrained. If after the first week or two you notice that one of your naps is not giving you adequate rest, or you are simply not sleeping in one of your naps, you should experiment with that nap by shifting it forward or backward 30-90 minutes to see if you sleep better having placed that nap differently. This will result in an imbalance in the equidistant nature of the schedule, but being equidistant is not as important as listening to your own body.

A note on exercise

While other schedules support exercise fine, few have been able to do proper exercise while on Uberman and still recover. It seems recovery from cardiovascular exercise is good, but weightlifting and sports can suffer from a low amount of total slow-wave sleep. If you are set on weightlifting whilst Uberman, avoid traditional high volume bodybuilding routines, as the stress can cause a sharp increase in SWS pressure causing you to blackout later that night. Evidence shows you might recover better from high frequency, low volume training whilst on a low sleep schedule.

A note on the 3h total sleep rule

A note on failure

Often people will try the Uberman sleep schedule only to fail and give up polyphasic sleep completely. There is no reason you cannot move from being an Uberman to any other schedule that shares your Uberman rhythm! Many people have first started on Uberman only to transfer to Everyman and be incredibly successful with their new schedule. In fact, it is recommended that people aiming for an Everyman schedule give Uberman a go before commencing, as Uberman has such a regulating effect on sleep, the entrainment is very beneficial for those wanting to do a milder schedule in the long term.