What is a Duvet Cover? Duvet vs Comforter

A duvet cover surrounds your comforter or duvet and adds style to your bed, but a duvet is not the same as a comforter. Learn the differences here.

What is a Duvet Cover?

Duvet vs. Comforter: Differences and Similarities

It’s a common misunderstanding that a duvet is the same thing as a comforter, but the two bedding types have several key differences.

A comforter is typically made of a more durable, styled outer fabric than a duvet insert. As a result, comforters do not require covers and can be used on their own.

Duvets, on the other hand, are most often found in simple, white designs and are made to be encased in a duvet cover that enhances their aesthetic.

Here are the key differences between a duvet and a comforter:

Here are the key similarities between a duvet and a comforter:

Pros and Cons of a Comforter

Pros and Cons of a Duvet

Wondering whether a duvet and duvet cover set is right for you? Consider the pros and cons before committing to this bedding style.

If you’ve decided that a duvet insert and duvet cover are the right choice for you, keep these shopping considerations in mind:

Ready to buy? Here are our recommendations for the Best Duvet Covers of 2020.

Learning toward a comforter? Here are some tips to keep in mind when shopping:

Duvet vs Comforter: Which is Right for You?

What goes on top of your mattress, sheets and pillows is just as important as the rest of your bedding. The top layer of your bed can make a difference in how well you sleep, how much you enjoy your bedroom and how attractive a guest bedroom appears to visitors. Your two main options for toppers are duvets and comforters, so how do you know which type of bedding right for you?

The choice between a comforter set and a duvet cover set comes down to convenience and style. If you like changing up the look of your bedroom, a duvet cover and duvet insert makes it easy to change up the look of your bedspread on the fly. If you’re the decisive type and already known what you want your bed covering to look like for years to come, comforters have a simpler, one-piece design and may make achieving a matching, layered look more accessible because most brands sell coordinating pillow shams.

At the end of the day, don’t get caught in the weeds of the differences between these two bedding styles. The names are often used interchangeably in the United States, and despite a few key differences, both duvets and comforters are designed to offer an attractive, comfortable exterior to your bed. 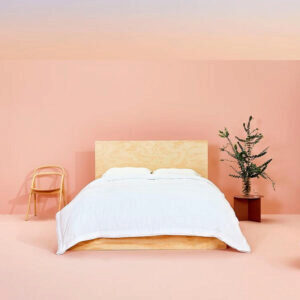 The concept of a mattress-in-a-box has boomed over the last several years, so it was only a matter of time before someone took a stab at applying the idea to other products. Buffy, a rising star in the bedding world, launched in December of 2019 as a duvet-in-a-box startup. While the packaging is somewhat disruptive […] 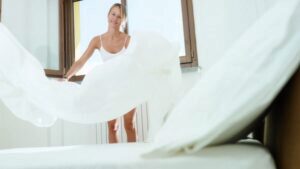 The importance of sheets can be overlooked. People often buy sheets based solely on color, thread count or size; but is that enough? Here at Mattress Nerd, we believe a great set of sheets can have just as much impact on your sleep as a great mattress. There are a lot of things to consider […]

How Often Should You Wash Your Sheets?