Multiple sclerosis is an unpredictable disease that affects nearly one million people in the United States. MS causes the immune system to attack the protective sheath (myelin) that covers nerve fibers. This disrupts the flow of information within the brain and between the brain and body. Eventually, the disease can cause permanent damage or deterioration of the nerves.

No two people experience the same symptoms of MS, and each person’s symptoms can change over time. Generally speaking, MS symptoms have a relapsing-remitting course where people experience periods of new symptoms or relapses over the course of days or weeks, and they usually improve partially or completely.

There is no cure for MS, though treatments can help speed recovery from attacks, modify the course of the disease, and manage symptoms.

About 50% of people with MS also experience sleep disturbances, and often sleep disorders in people with MS are under-diagnosed and under-treated. This can result in daytime sleepiness, difficulty concentrating, worsening depression, and loss of productivity. It can also exasperate pain, fatigue, and other symptoms of MS.

People with MS can suffer from spasticity, a condition in which muscles feel stiff or heavy and are difficult to move. This can produce feelings of pain or tightness around the joints. In severe cases, spasticity can cause uncontrollable muscle spasms or involuntary contractions of the muscle.

Many people with MS have a spastic, or overactive, bladder, which makes it difficult to hold the normal amount of urine and causes them to urinate often during the day. They also frequently have to get up and go to the bathroom and urinate at night, a condition called nocturia. Nocturia is a common cause of sleep loss.

MS lesions can occur in areas of the brain that regulate body temperature and thermoregulatory effector responses. As a result, some people with MS report overheating and sweating while sleeping. Night sweats disrupt sleep, forcing some people to change pajamas and even their bed sheets.

“Most people with MS have vitamin D3 deficiency! That or a genetic defect in their vitamin D receptor (VDR). Vitamin D3 is critical to deep restorative sleep,” says Dr. Judson Somerville. “Then deep asleep you need enough vitamin D3 as it controls the part of our brain that keeps us paralyzed except for our breathing. If inadequate vitamin D3 this center malfunctions.” People with MS may have heat sensitivity and as a result, tend to stay out of the sunlight. This can throw off circadian rhythms and can interfere with the release of natural melatonin, which helps you fall asleep at night.

But lack of sunlight exposure can also put you at risk for vitamin D deficiency. In fact, researchers have found that people with low vitamin D intake or low blood levels of vitamin D are at greater risk of developing MS. However, researchers point out that it is unclear whether low vitamin D levels are a cause or consequence of MS. Vitamin D plays an important role in our health. Low levels have been linked to type 1 diabetes, Alzheimer’s disease, dementia, schizophrenia, and some infectious diseases. Studies also show that a deficiency in vitamin D can put you at a significantly higher risk of sleep disorders.

Medications like corticosteroids, often prescribed to reduce nerve inflammation that occurs during MS attacks, can cause insomnia for as many as 70% of people who use the drugs. Some disease-modifying drugs and other medications used to manage MS symptoms can also affect sleep.

Napping (due to Fatigue or Excessive Daytime Sleepiness)

Fatigue affects about 80% of people with MS. When it occurs during the day, MS sufferers may feel inclined to take a nap. However, napping during the day can make falling asleep at bedtime more difficult.

People with chronic illnesses like MS are more prone to depression. One reason why people with MS are more prone to depression is because MS affects the protective coating around nerves that help the brain send signals that affect mood. This suggests that MS itself may cause depression. Depression may also be a side effect to some MS drugs. People suffering from depression tend to sleep a lot. Or, at least they try. Depression can make falling asleep and staying asleep a challenge, and may even contribute to some sleep disorders.

Restless leg syndrome (RLS) is a frustrating sleep disorder characterized by a sensation that makes you want to move your legs. It generally occurs at night while you’re trying to sleep. The symptoms are often described as tingling, itching, burning, aching, or pins-and-needles sensation. People with multiple sclerosis experience leg restlessness anyway. Studies show they are also more prone to RLS, with some research showing as many as 51% of people with MS having symptoms of RLS as well.

Pain is a symptom many people with MS suffer from, and pain can definitely make falling asleep difficult. Pain can also wake you up at night. As a result, pain can cause a sleep deficit. But, ironically, a lack of sleep can also worsen the perception of pain, creating a frustrating cycle.

Sleep apnea is a potentially serious sleeping disorder. Obstructive sleep apnea causes people to repeatedly stop breathing during sleep. This happens when tissues in the mouth fall to the back of the throat and block the airway. Central sleep apnea occurs when breathing stops because the brain doesn’t send proper messages to the muscles that control breathing. Both types of sleep apnea are disruptive to sleep and can be dangerous if they cause blood-oxygen levels to drop too low. Only about 3% of Americans have sleep apnea, but between 4% and 20% of people with multiple sclerosis have the disorder. People with MS may have either obstructive sleep apnea or central sleep apnea, or both. One reason is that MS causes lesions in the brain which may make it harder for the brain to control breathing while you sleep.

How Poor Sleep Can Impact Your Life

Fatigue makes you feel that you lack physical or mental energy. About 80% of people with MS are fatigued, which can cause problems with your personal relationships and work performance. Fatigue can also affect concentration and memory and cause mood swings.

Excessive daytime sleepiness, or EDS, is often confused with fatigue, but they are very different conditions. EDS is defined as an inability to maintain wakefulness or alertness when you are supposed to be awake. It is also the most prominent symptom of narcolepsy, a condition that causes sudden attacks of sleep. Sudden loss of muscle tone and hallucinations may occur during these attacks. EDS is most often caused by sleep deprivation. People with MS are more likely to have poor sleep quality and be at risk for EDS. Brain lesions caused by MS may also cause narcolepsy. In fact, MS is listed as the fourth common cause of narcolepsy that is associated with other sleep disorders, according to sleep medicine specialists.

It is estimated that half of everyone with MS will experience some cognitive symptoms such as memory difficulties at some point. Poor sleep can actually make it more difficult to concentrate and retain information. A study by researchers at Beth Israel Deaconess Medical Center shows that sleep actually triggers changes in the brain that help to improve memory, and that the more time spent sleeping, the better the mind preserves memory.

People with chronic illnesses like MS are already at risk for depression. But MS may also cause lesions in the brain affecting nerves that send signals that affect mood. This may be another cause of depression and mood disorders in people with MS. Depression may also be a side effect to some MS drugs. Depression is linked to insomnia and other sleeping problems.

Pain’s relationship to sleep is like a catch-22 for people with MS. Pain is a given for people with MS, making it difficult for them to get a good night’s sleep. But a study published in the journal Pain shows that a sleep deficit can also worsen a person’s perception to pain.

MS can cause mobility issues that put people with multiple sclerosis at risk for falls, which can have potentially life-threatening consequences. Falls and other accidents are also risk factors associated with daytime sleepiness caused by inadequate sleep. As a result, people with MS who have difficulty sleeping should be aware of their increased risk of falling.

Tips For Sleeping with Multiple Sclerosis

*Always consult with your doctor about your sleep problems and possible remedies. 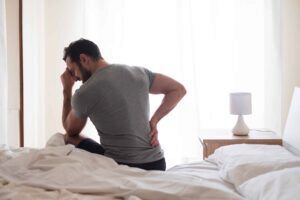 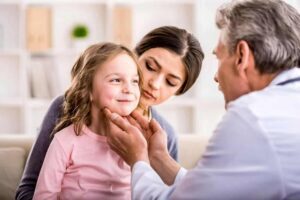 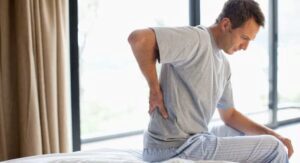 Best Mattress for Back Pain

Mattress Nerd consulted Vivian Eisenstadt, MAPT, CPT, MASP to ensure that this article met our editorial standards If you’re getting the recommended 7 to 8 hours of sleep per night, you’ll spend one-third of your life in bed. That makes the mattress you choose one of the most important factors in the quality of your […]