Torn between Purple and Amerisleep mattresses? This article explains the differences between the Amerisleep AS3 and the Original Purple mattresses, as well as how to choose the best option for your bedroom. 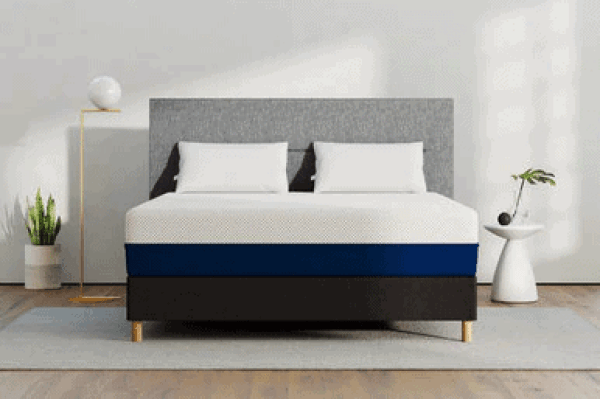 Who the Amerisleep Mattress is Best For 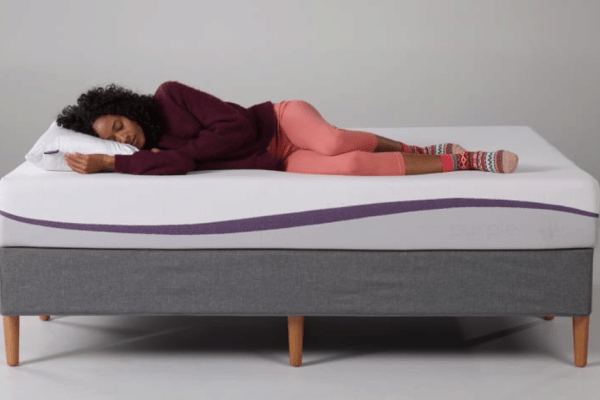 Who the Purple Mattress is Best For

May Not be Best For…

Both mattresses have a mid-range firmness setting, but the Purple clocks in at a solid medium-firm, while the Amerisleep AS3 is a true medium. Though the beds are of similar firmness levels, how they feel varies drastically and will likely be the deciding point for most shoppers. The Purple has a firm, yet comfortable, floating feel, and the Amerisleep feels like a memory foam bed that responds faster to pressure.

All-foam beds tend to isolate motion better than other styles, and the Purple, AS3 hybrid and AS3 foam are all relatively motion isolating and quiet. You may feel slightly more motion on the AS3 hybrid due to its springy, pocketed coil core. Couples need limited motion transfer to avoid disturbances from their partners as they sleep; see our best mattress for couples suggestions.

Support around the perimeter of a mattress is key for sleepers who want to spread out on their bed, couples looking to use the entire surface of the mattress, or those who sit on its edges. Edge support is achieved by denser, thicker foams and tends to be better on innerspring and hybrid mattresses. Neither foam bed has noteworthy edge support, and even the AS3 hybrid sinks a bit at the perimeter, despite its inclusion of coils.

Pressure relief refers to how well a bed cradles pressure points like the hips and shoulders. The AS3 provides enough body contouring for all sleeping positions, but the Purple Original’s pressure-relieving ability varies by sleeping position. Stomach sleepers in particular will find that their torsos sag on this mattress, which can lead to neck and shoulder pain. The best mattress for heavy stomach sleepers needs to be especially sturdy and firm enough to keep the hips lifted without resulting in pressure buildup in the hips and shoulders.

A mattress’s lifespan can usually be predicted by its style and the quality of its materials. The AS3 hybrid and foam beds will last about seven years, but Purple has not been on the market long enough to determine the average lifespan of the Original mattress.

The Purple Original offers much better temperature regulation than the AS3. The open construction of the grid layer allows air to flow through so that the bed sleeps cooler than average. The AS3’s top layer of memory foam can trap heat, in spite of its Celliant cover and the pocketed coil core in the hybrid version. To stop overheating at night, check out best cooling mattress.

Amerisleep vs. Purple: We compare the construction of two very different foam mattresses, the Amerisleep (left) and the Purple (right).

The Amerisleep AS3 comes in two styles: all-foam and hybrid. The options are similar apart from their support core. Both beds have a medium firmness setting, measure 12” tall and offer noticeable but responsive contouring from the top layer. The materials used in the beds include Amerisleep’s proprietary Bio-Pur foam, polyfoam in varying densities, pocketed coils and a Celliant blend cover for active recovery.

The cover of the Amerisleep AS3 is a high-quality, stretchy blend of Celliant and polyester. Celliant converts the body heat into infrared energy and transmits it back to the sleeper to help regulate body temperature and promote physical recovery for sore muscles.

The comfort layer of both models is 3 inches of open-cell Bio-Pur memory foam, which is a medium-density eco-friendly memory foam with a higher than average responsiveness. The top layer will feel soft regardless of your sleeping position but responds quickly to pressure. This makes it easier for sleepers to change positions, and it’s a plus for people who feel “stuck” on traditional memory foam beds.

The transitional layer of both models is 2 inches of polyfoam, which adds a buffer between the comfort layer and the firmer, more supportive core layer.

The Purple is a unique, all-foam mattress with a Purple Grid comfort layer, a high-density polyfoam transitional layer, and an even higher-density polyfoam base layer. The Hyper-Elastic Polymer on top is responsible for most of the bed’s feel; it conforms around pressure points for a “floating” sensation. Measuring 10” tall, the Purple has a medium to medium-firm setting.

The Purple cover has a nice stretch that complements the smart grid in the comfort layer. The grid softens where pressure is applied but maintains an even surface elsewhere, creating a floating feel that’s truly unique to the Purple brand.

The polyfoam transitional layer acts as a buffer between the sleeper and the firmer core, but it also contributes largely to the bed’s medium-firm feel (it’s firmer than most transitional layers). The support layer of polyfoam reinforces the mattress layers above it. Of note, this mattress is shorter than most foam beds on the market, which may appeal to some sleepers and deter others.

Shipping and Returns for Amerisleep & Purple

All Amerisleep mattresses come with a 100-night sleep trial. During the trial, you can return the bed at any time for a full refund. Amerisleep mattresses purchased online and in-store come with the Amerisleep warranty of 20 years, which is partially prorated and protects against defects in workmanship. Amerisleep offers free shipping to the contiguous U.S., and mattresses are delivered within three to five business days of purchase through FedEx’s curbside delivery.

All Purple mattresses come with a 100-night sleep trial. A break-in period isn’t required, so you can return or exchange your new mattress at any point throughout the trial for a full refund. Purple also covers return shipping expenses. Exchanges for a more expensive model will incur a charge for the difference between the mattress prices. All Purple mattresses come with a 10-year warranty, which is entirely non-prorated and protects against defects. Purple offers free shipping to the contiguous U.S., and most mattresses arrive within five business days. The Original Purple ships as a bed-in-a-box, while Purple’s other mattresses come with free White Glove delivery.

The best mattress from Amerisleep for stomach and back sleepers who like a medium-firm firmness level. This mattress is made to appeal to a wide range of sleepers and comes with a reasonable price point. 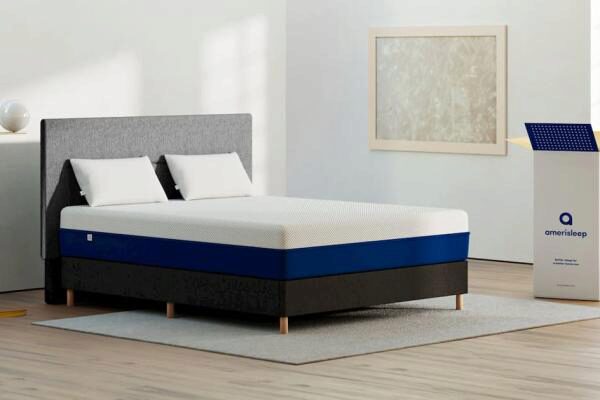 This medium-firm mattress comes in hybrid and all-foam styles and is best for stomach and back sleepers who need pain relief. It’s slightly more expensive than the AS1.

See our full Amerisleep AS2 Mattress Review to learn more. 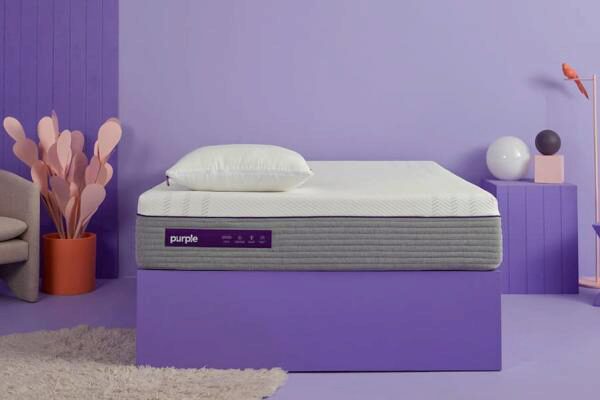 Built with a 2” Purple Grid comfort layer, the Purple Hybrid has a medium-firm feel and a pocketed coil support core. It offers more support than the Original and improved temperature neutrality, but it is more expensive. 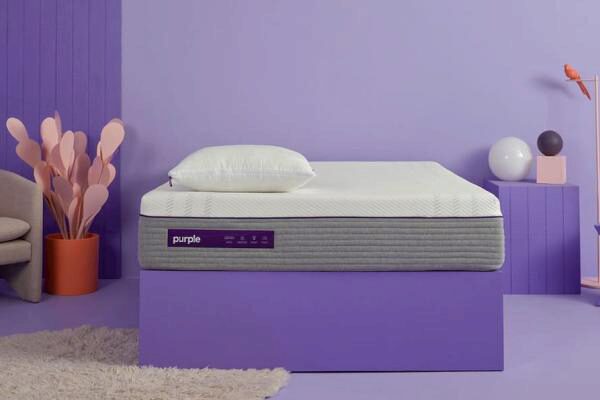 Purple’s most luxurious mattress, the Premier comes with a 3” or 4” Purple Grid top layer and has a medium or medium-soft feel. It isolates motion better than the other Purple mattress options, but it costs significantly more than both models.

Haven’t made a decision yet? Check out these other comparisons:

Our Final Take: Amerisleep vs. Purple

Now that you’ve read through the entire comparison, let’s decide which is the best mattress for you. First, it’s important to remember that both options are best suited for lightweight and average-weight sleepers. If you sleep on your stomach, you’ll be better off on the Amerisleep AS3. If you’re a side sleeper, back sleeper or combination sleeper, you can fare well on either.

For those of you who could sleep healthfully on either bed, your decision comes down to three factors: feel, temperature and price. Purple is the clear choice for people who sleep hot. If you’re on a budget, the Purple is our recommendation as well; it’s the cheaper option, even when the AS3 is on sale. Finally, if you like a foam bed with a little bit of responsiveness, you’ll enjoy the Amerisleep. If you want a feel that’s unlike anything you’ve ever slept on before or if you enjoy sleeping “on” your mattress rather than “in” it, you’ll enjoy the Purple. 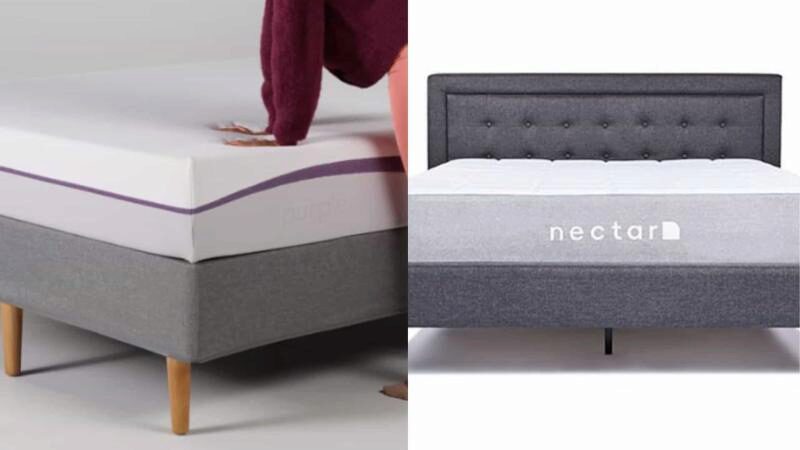 No doubt, it's hard to choose a new mattress. Check out our Purple vs. Nectar Comparison Review to learn their similarities and differences and make an informed decision. 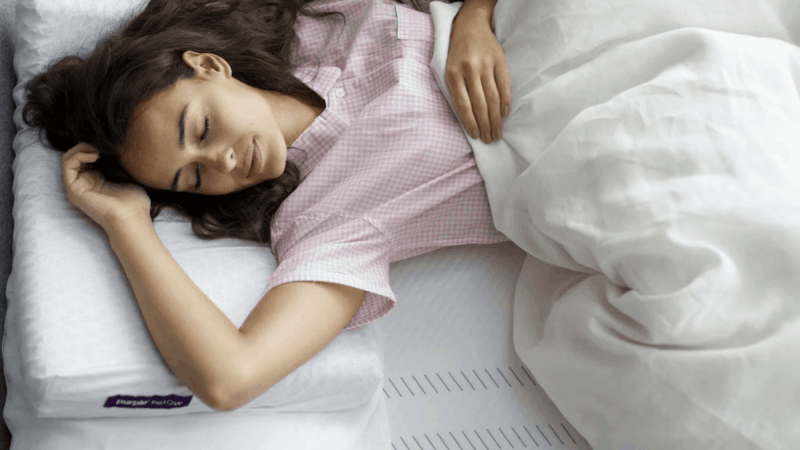 The Original Purple Pillow has a unique design and promises a supportive, responsive feel. We'll tell you what you need to know before you decide to purchase one. 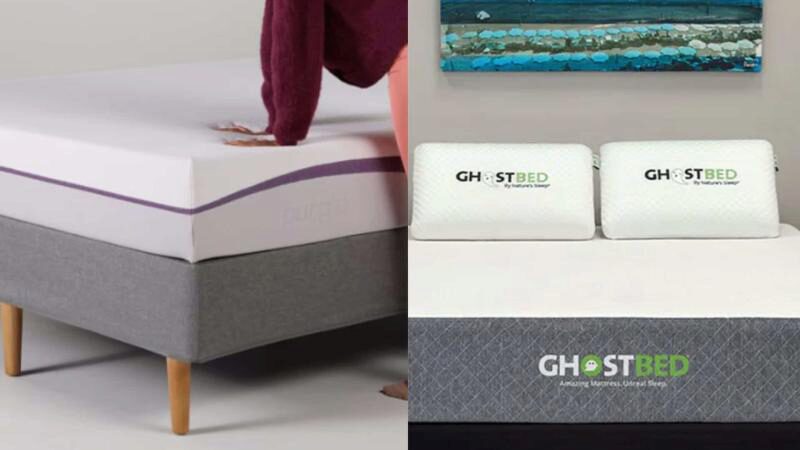 Save yourself some time and check out our comparison of Purple and GhostBed mattresses. We've done all the testing to help you decide between these two notable brands.